Why you should consider a bilingual dictionary 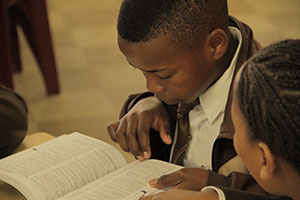 “Africa is the only continent where the majority of children start school using a foreign language,” says Adama Ouane, director of UNESCO’s Institute for Lifelong Learning.

Indeed, many South African learners who speak an African language at home battle to make the change from mother-tongue education in the Foundation Phase to taking all their subjects in English from the Intermediate Phase onwards. In 2015, when the Incremental Implementation of African Languages policy is due to kick in, all South African learners will have to take a third (African) language from Grade 1, so supporting effective language learning will be even more important.

It seems, then, that language proficiency is a major factor to consider when choosing a dictionary for your child. Learners have reported that bilingual dictionaries not only made it easier to grasp a foreign word’s meaning, it also saved them time compared to looking up words in a monolingual dictionary. A bilingual dictionary may also serve them longer, as anyone – from beginners to advanced students – can benefit from it.