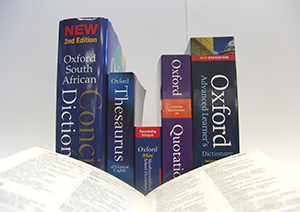 Oxford Dictionaries recently named selfie as their 2013 Word of the Year. The choice sparked a rash of comments wondering whether people were becoming more self-centred. But why selfie? Many people would say it’s slang, and slang doesn’t belong in a dictionary. Or does it?

Once you start thinking about what belongs in a dictionary, you might ask yourself, where do the words in a dictionary come from? If you haven’t thought about this much before, perhaps you picture a group of old men sitting in a darkened room writing the dictionary by hand. If so, you wouldn’t be alone. Dictionaries may have been made like that once, but now nothing could be further from the truth.

Modern dictionaries are made using an impressive array of computing power. They’re built on corpora – huge electronic collections of language in use. Dictionary publishers such as Oxford University Press use these corpora to find out what words people are using, how they’re using them and how their word choices change over time. Corpora are built up by web crawlers – software applications that run automated tasks over the Internet. Crawlers visit websites that lexicographers have identified as suitable, and then work outwards from there. One of Oxford’s corpora (they have several) collects about 150 million words of current English every month…

Are you now imagining a robot sitting in front of a computer writing a dictionary, or wondering how software can write a good definition of lethargy? On top of computing power, a good dictionary must have the expertise and experience of human lexicographers, with a fine sense of language and what people want to know when they use a dictionary.

Using its computing power, Oxford discovered that, in October 2013, selfie was used 17,000 times more often than it was in January 2013. This was one of the factors that led the Oxford dictionaries team to choose it as their Word of the Year. Similar analyses are done by the local Oxford dictionary team when they decide what new South African English words should go into new dictionaries. For example, the use of e-toll almost quadrupled in 2011, it more than doubled in 2012, and it looks set to double again in 2013. This would make it a strong contender for going into the new edition of the Oxford South African Pocket Dictionary, a dictionary widely used at South African high schools and as reference at home.

One of the other factors in favour of selfie as the choice for 2013 was its linguistic productivity – that is to say, the number of other words selfie has generated through people’s creativity. For example, helfie (a picture of one’s hair) and belfie (a picture of one’s bum). But surely you’d have to have bats in your belfry to put a belfie on Facebook? Rather send in a shelfie – a picture of your bookshelf.